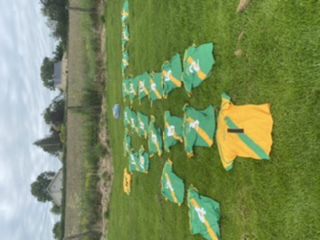 It is fantastic to be back out on the field and playing matches! Our Senior team started their East League Campaign on Saturday evening in Mackey Park against Doon. On a very humid and warm evening both teams hit the ground running as they traded scores in the opening minutes.

Willie Brennan, Niall Moran and Ciaran Barry all got points within the first two minutes of the game with Doon hitting points in response. Doon began to get on top after the first five minutes and got some fantastic scores from all over the field. One of the points of the game came from Paul O’Halloran who slotted a point over from a sideline ball, a score that would be at home in Croke Park. We gave away some silly frees and allowed Doon to push ahead in the first quarter. Niall Moran was deadly accurate from placed balls, and he kept the Ahane scores ticking over. Both teams battled hard throughout and there were some fierce tackles, shoulders and blocks all the way through the game. The score at the first water break was Ahane 0-05 Doon 0-09. Much like the first quarter Doon started the second quarter the quicker as they got a point to make them go five points ahead. Ahane response with a super point which started with Ciaran Barry saving the ball from going over the sideline, Ciaran O’Mara cleared it, Willie Brennan broke it to Paul O’Halloran who fired the ball over the bar. Not a minute later Paul got his and Ahane’s first goal of the night. Ahane’s second goal came two minutes later after Paul was fouled inside the square and referee Mike Sexton awarded Ahane a penalty which Niall smashed to the back of the net. As was a theme of the game anytime Ahane went ahead Doon were quick to pull it back. Half time and the score stood as Ahane 2-07 Doon 0-12.

The second half started much like the first, the teams were level on three occasions before Doon got their first goal after getting through our defence who tried everything to stop them, but they couldn’t keep them out. Three minutes later and Doon were through again for goal where Adam made a super save but Doon doubled on the rebound and the ball finished in the net. Score at the second water break was Ahane 2-10 Doon 2-17. Doon pushed on to an eight-point lead, but Ronan Fox and Niall Moran again put the ball over the bar and ate away at Doon’s lead! Doon continued to get some good scores, but we clawed back their lead and with 35 minutes of the second half played Niall smashed a free into the back of the Doon net which levelled the game. However, like every time Ahane scored Doon popped the ball over the bar down the other end. Unfortunately, referee Mike Sexton blew the full-time whistle after 36 minutes of play and we lost by a point. Full time score Ahane 3-18 Doon 2-22.