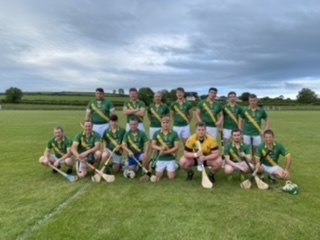 Our final fixture of the weekend saw our first Junior B team in 15 years line out against Fedamore in Fedamore on Sunday evening. Much to the delight of the players the temperature had dropped slightly, and it turned out to be a perfect evening for hurling.

Fedamore started the better and had 1-03 scored in the first six minutes. However, we got off the mark when Liam O’Mara buried the ball into the back of the net! Fedamore responded quickly but we kept the heads and continued to try work the ball into our forwards. Our next score came from full forward James Hayes who popped a free over the bar and closed the gap to four. The next number of minutes were all Fedamore and no matter what we did we couldn’t seem to get the ball to stick in our forward line even though any ball that went up there our forwards worked tirelessly to keep it there and showed the true meaning of you start defending from the corner forward down. Seanie O’Connor had a super game and got some great scores along with plucking the ball from the clouds on numerous occasions. As the half was coming to a close, we started to hit our stride with some great teamwork between Liam O’Mara and Davy Laing that saw Davy pop the ball over. Our second goal of the evening came from James who rose above the crowd, caught the ball and batted it into the net giving the Fedamore keeper no chance of saving it. David Kennedy tacked on two more stunning points and the scores at half time were Ahane 2-05 Fedamore 1-10.

The second half started much like the first with Fedamore the quickest to get the scoreboard moving again. We got going six minutes in when Davy popped the ball over the bar in another beautiful score. Podge O’Connor added his name to the score sheet three minutes later and the gap was only two points, but Fedamore never let us get any closer than two points. Killian Carroll had a superb game at full back. He was a stone wall; you couldn’t go around him or through him! He caught some great ball and made some fantastic hooks and blocks, along with John Hassett, David Troy, Denis Hayes, Seamus Richardson, and Tristian O’Sullivan. Huge credit has to go to Robert Magill in goals who made some serious saves throughout the game which were as good as a score for team moral! We made numerous shots on goal but credit to the Fedamore keeper and their defence they managed to save them all and clear them. Fedamore started to get on top again after the water break, but we never gave up and our efforts were rewarded in the 32nd minute when James Hayes got his second and our third goal of the game. This brought the gap to three, but Fedamore scored one more point and the game ended on the score line of Ahane 3-08 Fedamore 1-19.

Huge credit has to go to our lads who never gave up and put in a serious shift over the sixty plus minutes. It is such an achievement for the club to have three adult teams and we are so proud of the lads!